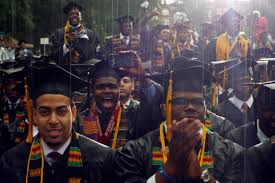 Morehouse College was lucky to have President Barack Obama speak at the 129th Commencement ceremony yesterday. During his speech the President made it a point to address all black men.

Sunday President Obama told the graduating class at Morehouse College, the country’s pre-eminent historically black college, there is “no time for excuses” for this generation of African-American men reports USA TODAY. The President continued by let the young men know that  it was time for their generation to step up both professionally and in their personal lives. Barack Obama, our country’s first African-American President, chose a particularly poignant moment to deliver the commencement address at the Atlanta college that boasts civil rights leader Martin Luther King Jr., filmmaker Spike Lee and Atlanta’s first African-American mayor, Maynard Jackson, among its alumni according to USA TODAY.

This visit came nearly 50 years after Dr. Martin Luther King led the March on Washington, and it comes 150 years after Abraham Lincoln issued the Emancipation Proclamation. Talk about history being made! The president paralleled his path to the White House to the work of King and other African-American leaders. Despite the talking about his journey to success,  Obama also admitted that at times as a young man he wrongly blamed his own failings “as just another example of the world trying to keep a black man down.” The President was heard boldly saying “We’ve got no time for excuses — not because the bitter legacies of slavery and segregation have vanished entirely; they haven’t,” Obama continued his motivating words through intermittent rain and thunder. “It’s just that in today’s hyperconnected, hypercompetitive world, with a billion young people from China and India and Brazil entering the global workforce alongside you, nobody is going to give you anything you haven’t earned.”

Obama spoke in a very personal, fatherly tone to the 500 young men as he urged them to not only become leaders in their community, but also good fathers and good husbands. A trend we have not seen in the upcoming generations. Obama, who was raised by a single mother and grandparents, spoke about the absence of his father in his life and urged the graduates to make family their top priority.

Obama encouraged the Morehouse men to set an example for other black men.

“Keep setting an example for what it means to be a man,” Obama said. “Be the best husband to your wife, or boyfriend to your partner, or father to your children that you can be. Because nothing is more important.”