Lil Scrappy Is Still With Shay Johnson And She Says “F**k Erica”!

by Sommer Payne / May 21, 2013 Black Celebrities, Black News No Comments

Shay Johnson spotted out with radio host Angela Yee in Philladephia this past weekend hosting a birthday party for ex-stripper extraordinaire Gigi Maquire. Shay reportedly got a little too rock star wasted and spilled the beans about her relationship with rapper Scrappy in front of the entire crowd!

According to people present at the party, Shay Johnson was at Club Onyx and got a way out of pocket while on the microphone. Apparently the bitter chick hopped right on stage and went on a rant about Erica Dixon, reportedly yelling “F**CK ERICA!!” in front of the entire crowd while drunkenly threatening her as party-goers witnessed the entire scene.

Shay then went on to say that although Scrappy might claim he’s single, he is still having sex with her and at the end of the day he’ll always be her man and not Erica’s! I’ve never seen someone so proud to be a side line chick!

Bossip hilariously stated, how it’s funny that Shay had to go to a completely different state to say all of this, meanwhile Erica is probably boo’d up with Scrappy watching cartoons with their daughter.

To make matters even worse Shay was seen with Momma Dee and Lil Scrappy at a charity event at the “XS Ultra Lounge” in Atlanta. The event was held by Momma Dee and called “Stomp the Runway.” During the event Momma Dee went so far as to crown “Shay Johnson Princess of the South.” Okay now she’s taking this whole thrown and kingdom mess a little too far.

Momma Dee has always been outlandish about her feelings when it comes to her not endorsing Scrappy and Erica’s relationship, and wanting her son (or shall i say Prince) to be with Shay. So maybe Lil Scrappy has finally given in to his mother’s encouragement. Many are saying that he has been seen all around Atlanta flaunting Shay on his arm. 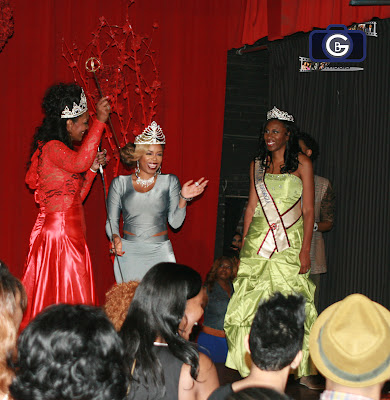