Reportedly lawyer-turned-pro wrestler David misses the curva­ceous beauty he first fell for when they met five years ago – and he wants her back!

Here’s a picture a the R&B singer back then. 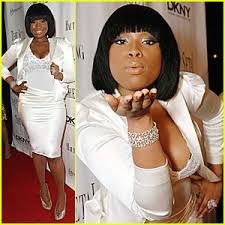 “Jennifer’s weight has been an issue between them ever since she lost her first big chunk of weight in 2010,” said a source close to the couple. “When they met, she was a happy, proud, healthy woman who loved food and embraced every aspect of life with so much enthusiasm.

“Now she takes up to four hours to get ready when they go out, and she gets stressed out every time she puts a morsel of food in her mouth.”

The former “AMERICAN IDOL”contestant began her weight-loss journey in 2010 when she signed a multimillion-dollar deal with Weight Watchers. A privilege no one else gets, we just have buckle down and lose the weight! By 2011, the 31-year-old star revealed she’d lost an amazingly 80 pounds and she had gone from a size 16 to a size 6.

Jennifer admitted to Jay Leno in an interview that David was having difficulties adjusting to her new size. “He’s not really into change that much, so he fusses at me like, ‘Why do you have to get all dressed up to go out,’ and ‘Why can’t you just go out like you used to?’”

David, 33, is also con­cerned that his Oscar- and Grammy-winning fiancee is becoming more famous for her shrinking waistline than her considerable talents, according to the insider.

“David tells her he thinks she’s beautiful no matter what size she is, but he misses the down-to-earth ‘I don’t care’ Jen,” the in­sider explained. “Every meal is a pain in the butt, and he’s starting to feel totally sidelined by her obses­sion with her weight.”

I’m sorry but I would just have to tell little ol’ David to get over it because J-Hud’s body is banging!